Psyray Professional measures the exchange of information of your body cells and thus exposes your psycho-emotional patterns.

Our starting point is that body and mind are a unit and that each cell in the body has its own frequency and thus its own story. By scanning and analyzing these vibrations, we can objectively and quickly determine the state of mind of your body. The software calculates the origin of this with complex algorithms and provides solutions in concrete steps.

In the world, there has long been a need to understand the processes of man, both psychologically and physically. The current (para) medical assistance uses different techniques to find out this information. The ‘reading out’ of information from the human body can be done in three ways:

The various bioresonance devices typically work with electrodes that the patient holds. The skin resistance is measured by making an electrical circuit. The signals are carried out by the hardware as electromagnetic signals during testing. Using a simple and safe low voltage circuit that is formed by two electrodes on the body. This records the body’s response to these signals.

The measured response is small changes in the electrical resistance of the skin.

This idea has been developed in various devices such as SCIO, Indigo, Energetix, L.I.F.E., MARS III and Asyra.

Electroacupuncture does not use needles, but depends on the supplier of test pins, electrodes on the finger, handles and foot plates, among other things.

In the late 1940s, the German physician and engineer began dr. Reinhard Persevere with the development of electroacupuncture according to Voll (EAV), also known as Vollse acupuncture, and as Electro-Dermale Screening (EDS).

Electroacupuncture according to Voll follows the idea of acupuncture that the body is classified into meridians, that an energy system in the body can become unbalanced, and that problems at the acupuncture points can be met.

Examples of such devices include BICOM, MORA, VEGAtest and Prognos

Radiological equipment is used to look up the nature and place of an illness, injury or condition by means of rays or waves. In radiological equipment, it is assumed that the tissue emits energy that can be read out electromagnetically (with antennas). Magnetism and electrical charge are used.

Each application has its own frequencies to which ‘read’ is read. MRI, EGC and CT work with a magnetic field to scan the electrical charge at specific frequencies. Ultrasound works with sound waves. META scan, ETAscan, Oberon, Metatron and Psyray work within the magnetic field with different frequency bands to use these frequencies as a carrier to read the sampled information. 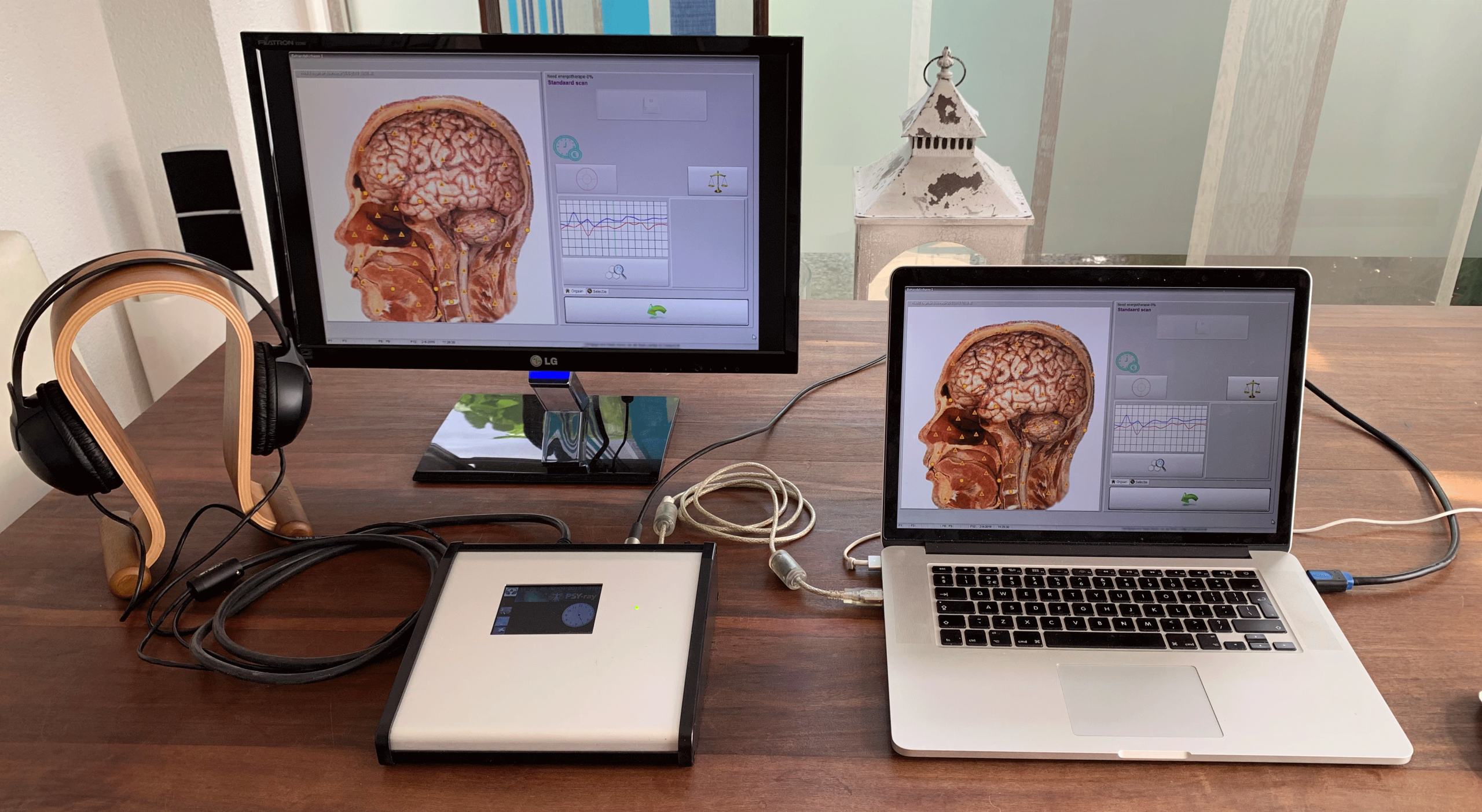 In the meantime, psyray technology has arrived at version 4.0. It has been redeveloped with all knowledge since 1973 into a new product that went into production in 2019. For over 4 years we have been working on improving scanning technology and interacting with psyray software intelligence. To give an idea of the results of this development, the biggest differences are with the old technological base, which is used in other radiological systems.

The course of a session

At the beginning of the session, the Psyray headphones are placed on your head, while you sit quietly on your chair. Then the scan begins, which you can follow on the screen. You see energy values, curves of your relevant physiological functions and organs passing by such as brain, heart, lungs, stomach, liver, nervous system, up to and including cells and chromosomes. This data is also the starting point for further analysis that builds up your complete story of your current process.

Psyray is a non-linear system (NLS) built on a new paradigm of entropy and quantum information links and quantum logic. The development of the databases is based on psycho analytical characteristics. This makes Psyray a PsychoPhysical system.

The main principles are:

Given that quantum information has many unusual properties, one would expect quantum theory to have a profound effect on our understanding of computer science. But, quite unexpectedly, this was made possible by Peter Shore in April 1994. Shore showed that a computer can effectively factor in large numbers.

Factorization (sees finding simple composite number multipliers) is an example of a difficult-to-solve problem with the following properties:

Quantum logic with quantum states defined on it is in fact a non-classical probability theory. The difficulty was the consistent development and integration of non-switchable versions of classical concepts.

After setting algebraic logic, it is necessary to convert logical concepts and problems into algebraic, which makes it possible to examine logic and its properties using algebraic methods. With this approach, quantum logic logic is semantically determined by an algebraic structure.

Quantum Entropic Logic is a symbiosis of quantum information and quantum logic that allows us to evaluate the entropy of the state of a biological object (human) including his psyche using mathematical methods.

The conclusions of the Quantum Entropic Logic are the following:

It is known that there are several mechanisms for the control of the homeostasis (internal environment) of the organism.

Any cell or tissue in an organism can be considered a receiving and transmitting radio station. The signal of biological regulation used in information exchange in biological systems has a complex structure. If we take a radio station as an example, we have one carrier wave frequency with a high frequency spectrum that is modulated by a low-frequency component that carries sound (radio) or image (television). We see the same principle in biological systems, but not with two modulation levels as in technical devices. Biosystems have hundreds of thousands of such levels. Each high-frequency component is modulated by a lower frequency component. This principle is reduced to very low frequencies (up to a few hertz). These are correlated with brain frequencies.

Each biological tissue contains DNA that the body has in common and is represented throughout the range of these frequencies, but has a specific frequency for this tissue. At some point in this range, the characteristic signal amplitude of a given tissue exceeds all other frequency components. This frequency is called the natural frequency of the tissue.

Based on V.I. Vernadsky’s ideas about the biosphere developed in the early 1920s, the book ‘Biosphere’ was published in 1926, consisting of two essays: ‘Biosphere in Space’ and ‘Area of Life’.

According to Vernadsky, the biosphere is an organized, dynamic and sustainable balanced, self-sustaining and self-developing system.

The main characteristic of the organization is the biogenic migration of chemical elements produced by the forces of life, the energy source of which is the radiation energy of the sun. 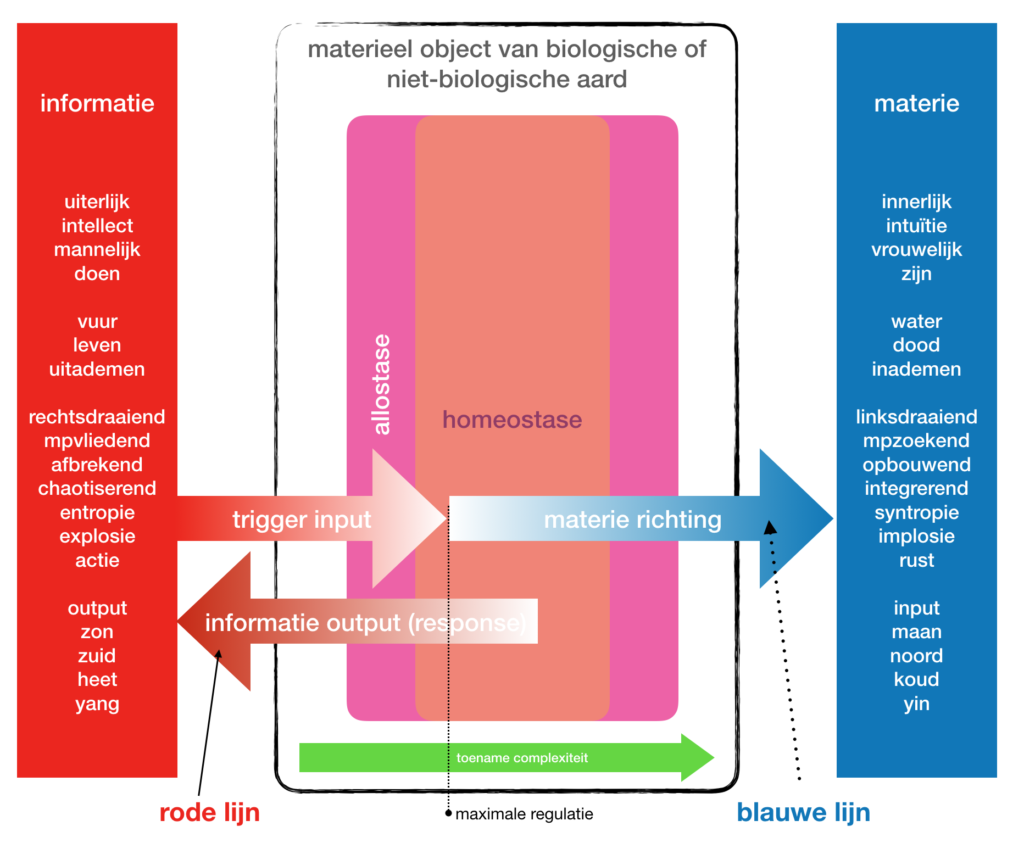 Any biological system (cells or tissues of an organism) can be considered a cybernetic system or black box. In accordance with the laws of cybernetics, the system will work if there are two signals present: import and export. At the same time, we are not aware of the nature of the processes within the system. In order to evaluate the state of the system, we need to evaluate the system’s entry and exit signals.

By analyzing the dissociation in the graphic spectra, we can understand how quickly and how intensively which tissues are destroyed.

The brain consists of two hemispheres.

When a bio-information grid is projected onto the human body, it gives an image of a geometric grid. This grid was first described by ancient Chinese medicine as the Jing Luo meridian system: a projection of this grid on the skin. The intersections of the maximum wave amplitudes from various biological sources (grid points) are called acupuncture (biologically active) points. Acupuncture points exist not only on the surface of the human body, but also in and on the surface of each organ.

We can assess the condition of each specific point in the organ, relying only on the characteristics of biologically active (acupuncture) points that have strictly individual wave characteristics (frequency, porosity, signal amplitude and wavelength).

The most important elements in the structure of Psyray technology are:

Psyray, unlike other (NLS class) manufactures, is composed of low-frequency trigger generators.

Consistent interaction of initiating signals, signals from generators and electromagnetic fields of the hemispheres of the brain with subsequent mathematical algorithms (see above) makes it possible to assess the state of structures of a biological object (humans), from the level of DNA to organ systems.